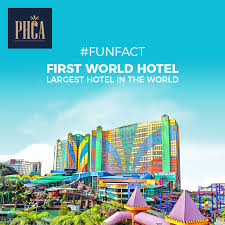 When you think of the world’s largest hotels, a few things come to mind. You may think of the MGM Grand, the First World Hotel, or the Sheraton New York Hotel and Towers. However, other world-famous hotels aren’t as well known.

First World Hotel & Plaza, located in Malaysia’s Genting Highlands, is the world’s largest hotel complex. It has over half a million square feet of retail space and 7,351 guest rooms. The SkyAvenue shopping mall connects the buildings.

The First World Hotel was the world’s largest hotel when it first opened. It held the title until the expansion of the Venetian in Las Vegas in 2008. But First World was reclaimed in 2015. Now it has more than 3,164 standard and deluxe rooms.

The MGM Grand Hotel and Casino in Las Vegas is one of the largest hotels in the world. Its sprawling casino and luxury accommodations make it the premier hotel on the Strip.

Its casino offers a wide range of games and high-limit tables and is open to everyone. There is also an extensive spa and fitness center. In addition to traditional games, MGM Grand offers slot machines and progressive jackpots.

MGM Grand features several dining options. One of them is Morton’s steakhouse, which features award-winning dishes. Ingredients for these meals are sourced from family farms throughout the country.

Other dining options include Avenue Cafe, which serves retro-style food. The hotel has a spa with eight treatment rooms, saunas, and whirlpools.

The casino offers a variety of slot machines, blackjack, craps, and roulette. Additionally, the AdventureDome amusement park features a SpongeBob SquarePants 4-D ride and the Canyon Blaster roller coaster. There is also a water slide.

The hotel’s dining options include fast food outlets, Starbucks, and a 24-hour deli. You can also enjoy a traditional buffet. However, the food choices close early on weekdays.

The Splash Zone has a 50-foot slide tower for travelers with children and multiple pools. In addition, there is a wading pool for younger guests.

Baha Mar is a large, multi-million-dollar resort hotel that is arguably one of the largest in the world. It’s located in Nassau, Bahamas, and has several different amenities.

Baha Mar features an extensive casino, a golf course, and pools. The resort also features a variety of restaurants and retail shops.

Although the property has three central hotels, each offers a unique experience. One is the Grand Hyatt Baha Mar, which provides more than 1,800 rooms. Some of the accommodations are in suites, and others feature private balconies. This luxury hotel offers guests full hair and makeup services, on-site convenience stores, and an exclusive beach area.

Makkah Royal Clock Tower is one of the world’s highest hotels in Mecca. Located 450 meters above ground, it overlooks the holy Kaaba. It is the centerpiece of the Abraj Al-Bait complex of seven luxury hotels. This landmark was conceived to cater to the growing number of tourists visiting Mecca.

The tower is constructed of a steel frame weighing 12,000 tons. German tower clock manufacturer PERROT provides the clock on top of the building. A spire on the top adds 601 m to the height.

Five shopping malls surround Makkah Royal Clock Tower on the bottom. There are eight64 suites in the building. These suites offer luxury and comfort. They are decorated in Islamic style.

One of the largest hotels in New York City, Sheraton New York Hotel and Towers, offers more than 55,000 square feet of flexible meeting space. The hotel also features an upscale executive conference center. It’s conveniently located near Fifth Avenue shopping, Rockefeller Center, and the theater district. Guests can get around by subway or taxi.

The iconic Sheraton New York Hotel and Towers is amidst a massive renovation. It will expand its guest rooms and feature a new Club Lounge. This project is part of a global portfolio enhancement initiative. The project will start in December 2011 and is expected to be completed by May 2012.

Initially designed in 1966 by Lapidus, the hotel reflects the jet-set style of the 1960s. The lobby features wood-paneled walls and carpeted floors.

Hotels With a Sauna Near Me